The Stories Behind The Names

In Rowing, there is a great tradition of naming boats.  When a boat or shell is bought it should have the honor of being named with a christening.  That name has meaning to the team.  It can also be an opportunity to recognize someone for their commitment to our program. To show our appreciation.  It is a great honor in the rowing world to have a boat named after you!

These are the boats we have christened and their history. 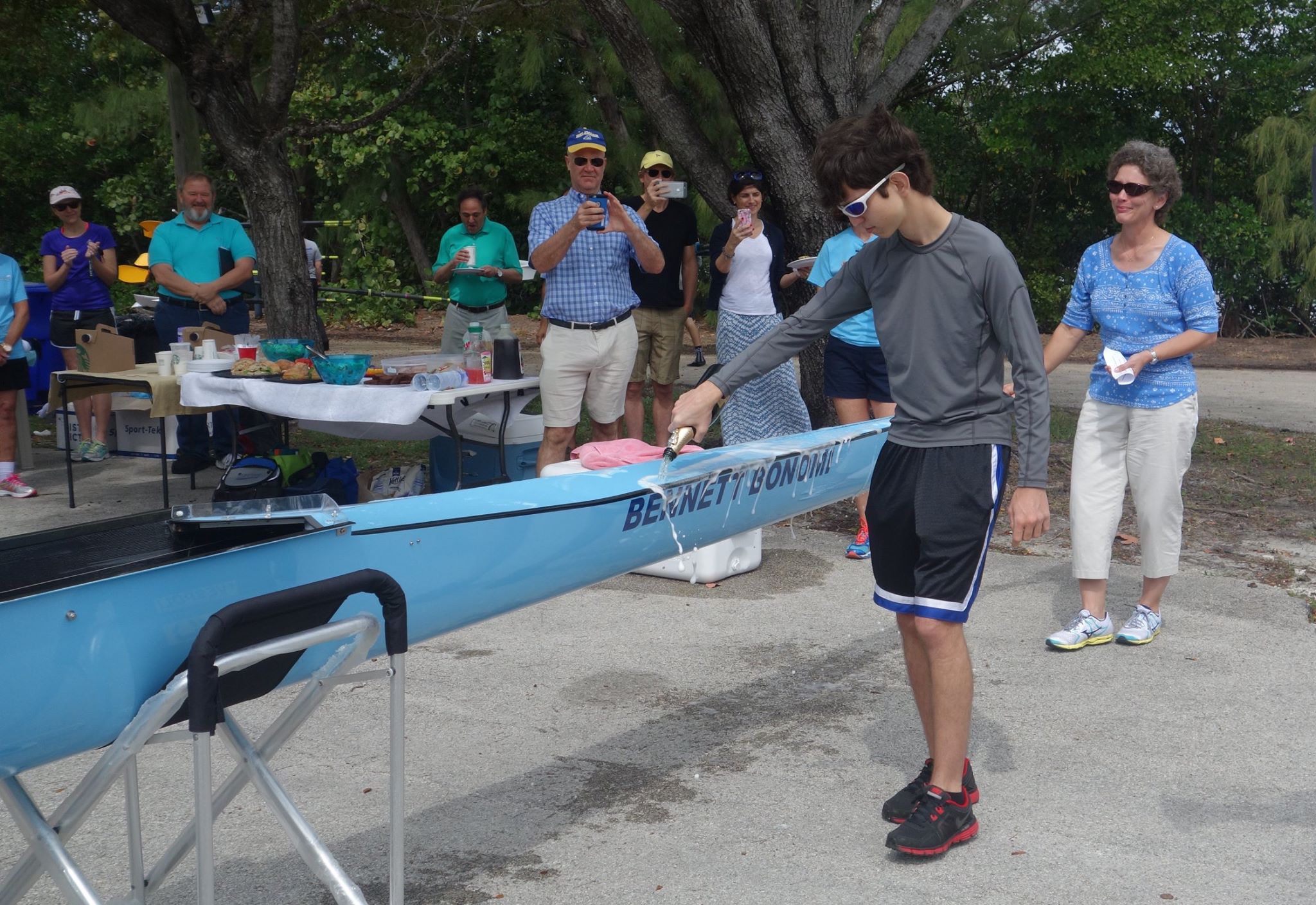 This is a 2021 Lightweight Vespoli 4X in our beautiful blue!  It is only our third brand new boat and our first brand new quad.  We are grateful to our 2020-2021 Families.  They worked hard to secure donations during our erg-a-thon to purchase this boat!

The Neptune was named by our current girls and means “god of the sea” in Roman mythology.  We hope this name will help our girls to dominate the sea also!

This is a 2020 Lightweight Vespoli 8+ in our beautiful blue!  It is only our second brand new boat and our first brand new eight.  We are grateful to our 2019-2020 Families whose donations helped to purchase this boat.

In This Together captures the period during COVID-19.  Our 2020 Season was cancelled in March in order to stop the spread of COVID.  It was very disappointing to have trained all year and then not be able to race.  But, the girls continued to train on their own and entered some races virtually with ergs.  This boat will always remind of us our perseverance and that with COVID or not, we are in this together!  We cannot achieve our goals alone.  We must always work together to realize collective success!

Girls In The Boat

Girls In The Boat is a 2019 Lightweight Resolute 4+ made just for us in our beautiful blue!  It is the first brand new boat we have ever owned!  We are grateful to the 2017 and 2018 Teams who donated and fundraised to purchase this boat.

Girls In The Boat is a play on words of the book The Boys In The Boat by Daniel James Brown.  This is an excellent book on rowing which we highly recommend reading!  It is also a true story of American grit in the 1930’s.  Naming this boat Girls in The Boat will remind us of the grit and determination needed to be successful.

These are the girls who joined our first year in 2015 when we had very little resources.  Despite our lack of resources, they stuck with it, got their friends to join and returned each year until they graduated.  Their perseverance will always be remembered as the reason this club exists.

The Alm1gh7y and The Lim17less are 2012 Swift Midweight doubles.  These were a gift from the Class of 2017.  They were painted our HGRC blue and they have won many medals!

These boats are dedicated to the Class of 2017 and their names were designed by them representing their spirit.  All of the girls in this class attended St. Thomas Aquinas High School.  Of these seven girls, five graduated Suma Cud Laude and Leniza Dever received our first rowing scholarship!  They are attending Boston College, Boston University, Florida Institute of Technology, Stetson University and University of Florida.

“The Labore” is a 2014 Swift Super Lightweight Quad.  It was a demo until we purchased it in 2016.  It was our very first sculling boat and has won many medals!

Nil sine labore is Latin for “nothing without work”.  This is very appropriate for our team and Rowing in general.  Rowing requires a lot of work and sacrifice because of the time and physical demands needed to be successful.  But, it’s rewards are great – achieving goals you never thought possible, living values that make you a better person and making friends that will last a lifetime.  Nothing worth having comes easy.

“The Hone” is a 1999 Vespoli Millenium Midweight 8+.  We purchased it in February of 2016 and refurbished it to “like new” condition with new paint, seats, riggers and shoes.  The refurbishment was completed in October of 2016 and it has won many medals since then.

We are happy to name it after Bob and Eunice Hone.  From our very first practice, they have been our support.  They are here practically every day to assist with whatever we need and they have contributed financially too buying oars, boat racks and many other items for our team.

Bob began rowing in the 1950s for LaSalle High School in Philadelphia.  He is a founding member of this club – ensuring that this boathouse was built back in 1990 with financial support and many hours of his time.  Bob has served as President of the club as well as on our board.

Eunice is amazing.  She helps with whatever we need – driving the launches, coaching and keeping an eye on everything to ensure we are running smoothly.  We have come to rely on her.  Another thing we love about Eunice is that she can do anything!  She is so mechanical and really has an eye for how things work.  When we needed a dolly to roll the launch down, we put it on our To Do List.  But the next day we came to practice, we saw a brand new dolly that someone had made.  It was Eunice.

Eunice is a rower herself which makes her valuable as a coach.  She was also one of the founding members of this club and is currently our Secretary.

“The Bonomi” is a 2001 Vespoli Lightweight 4+.  We purchased it in December of 2015 and refurbished it to “like new” condition with new paint, seats, riggers and shoes.  We began rowing it in March of 2016 and it has won several state and regional medals since then.  This is our first boat we ever christened.

It is named after Bennett Bonomi.  Ben was the President of Hollywood Rowing Club when we began our team in 2015.  He helped us get started.  He made it possible for us to row here.  He was very supportive of youth rowing and wanted to pass his knowledge onto the next generation.  He volunteered a great deal of time to our club – always willing to help with technique and training and ensured club members adhere to safety standards.

Ben began rowing at the Coast Guard Academy in 1975 and competed in many prestigious regattas.  After serving our country, he was a pilot with FedEx.  He was a devoted father to three boys and a loving husband with a strong Christian faith.  He died unexpectantly on December 23, 2015.

We hope the values Ben showed to us – kindness, inclusiveness and patience  – will live on in all who row this boat.  He was a positive role model at our club and we should all aspire to live his values.

“The Hollywood” is a 2001 Vespoli Midweight 4+.  We purchased it in December of 2015 and refurbished it to “like new” condition with new paint, seats, riggers and shoes.  We began rowing it in March of 2016 and it has won many medals since then.